Yesterday, I had to get my hair and beard trimmed. The same guy’s been cutting my hair since I was 18 — so thirty years, now — and he’s amazing. I’ve followed Allan to five different salons in the West Village over the past three decades, the latest of which is the Rizza Salon on Greenwich Street: 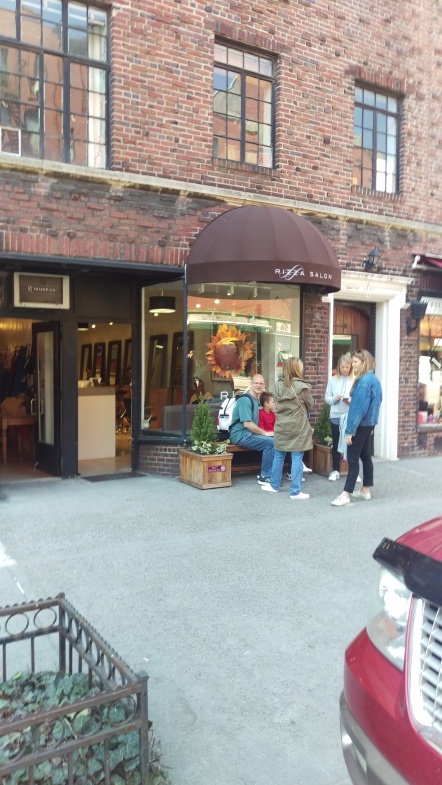 He did his usual magic, and I came out looking all neat and trimmed.

My hair looks a bit too straight because Allan brushes it while it’s still wet — this is why I only brush it when dry, as that maintains the waves and curls and stuff. And that sentence is the entirety of what I’m willing to arse about with regards to hair care. *laughs*

Afterward I headed off to do fun things. First, though, I needed food, so I headed over to Two Boots, one of my favorite pizza places. Got me two slices and a couple of black cherry sodas (one of the many reasons why Two Boots is awesome, besides their excellent pizza, is that they carry Boylans sodas).

After food, I stopped by the Tiles for America monument on the corner of Greenwich and Seventh Avenue South, which is a bit weather-beaten, but still nifty…. 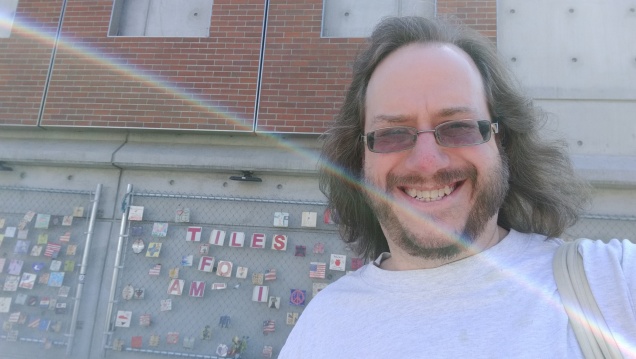 Then it was a leisurely walk through Greenwich Village. So much of the Village has changed since I first started meandering around Manhattan by myself as a kid. I started collecting comic books in 1981, and it was around 1982, when I was finishing eighth grade, that my parents started trusting me to travel on the subway alone — usually to go to the Forbidden Planet on Broadway and buy my weekly stash of funnybooks. What’s fascinating to me about how much has changed in 35 years, and yet how much remains the same. The main difference is that the area is far more touristy now, and more commercial. The notion of a Starbucks or a Dunkin Donuts or some other chain store in the Village would have been unimaginable in the 1980s, but is commonplace now. On the other hand, so much of the vibe is the same. As is, naturally, the beautiful architecture, as you can see at this look down Charles Street:

Eventually, I wound up on Christopher Street and McNulty’s Tea & Coffee. New Yorkers have been getting their coffee and tea at this charming little shop on Christopher Street since the late 19th century (and, based on their sign, they haven’t changed the font in 122 years, either), and my family has been acquiring their caffeine there since the early 1970s. Speaking of things that are the same and things that are different: McNulty’s hasn’t changed in the last forty years. Well, okay, it smells a bit different, as they have more flavored coffees and teas than they used to, which is a result of changing tastes in tea and coffee among the general population, but otherwise? Same dark wood floor, same gigunda brass scales and scoops to measure out the beans, same bags, same brown tape dispenser to seal the bags, same stamps to mark each bag, same barrels, same containers, same everything. It’s fantastic.

After purchasing some Hawai’ian Kona and Sumatra, I headed to the Christopher Street station on the 1 train, pausing first to go to Christopher Park, which is now part of the Stonewall National Monument, which includes both the park, the block around it, and the Stonewall Inn. I especially liked the Gay Liberation Monument set of statues in the park, which is two same-sex couples hanging out in the park with everyone else. This pic is the monument with the Stonewall Inn itself in the background: 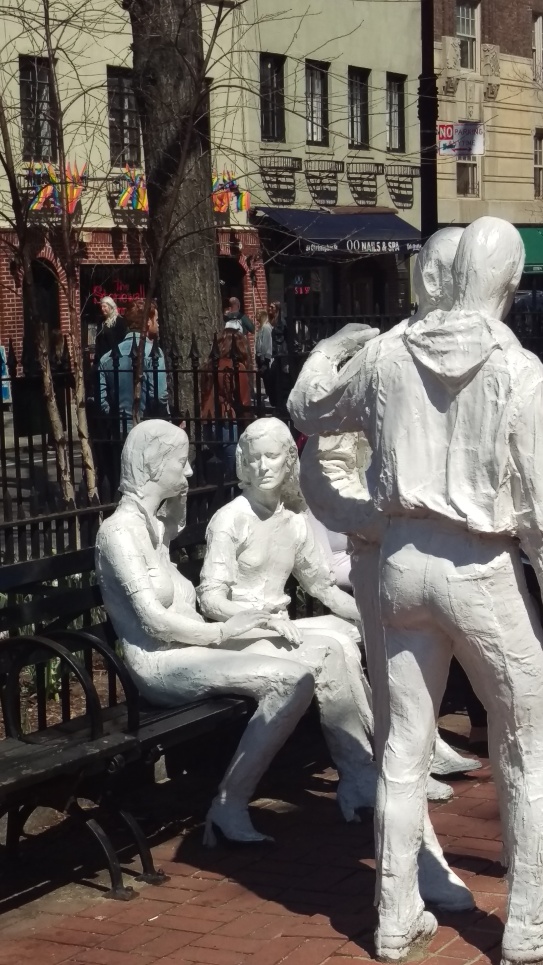 Speaking of how touristy the Village has become, there were tons of tourists taking pictures at Stonewall, which was actually kind of cool. That’s certainly not something you would’ve seen in 1982…..

After that, I hied myself up to Rockefeller Center to check my PO box. Speaking of things changing or not, my relationship with my PO box has changed radically over the past twenty years. When I first got it, my marriage was breaking up, and I wasn’t sure where I was going to be living, so I got the PO box to give myself a constant address. After I settled back in the Bronx, that home’s mail carrier was blind and illiterate (we were constantly getting mail for other addresses, and stuff kept taking forever to make it to us), so I kept using the PO box as my primary address for things. Then, as time went on, two things happened: we got a new mail carrier and I also just in general get less mail. The PO box used to be the repository for things like contracts, checks, copy-edited manuscripts, page proofs, fan letters, and when I was doing Imaginings back in 2002, submissions. All of those things come electronically now — the vast majority of my payments for work now come electronically, ditto contracts and page proofs and manuscripts and fan letters. And even if I do ever do an anthology again, I’d be accepting submissions electronically.

Anyhow, I still keep the PO box, as there’s value in having an address I can give out to the public without saying precisely where I live, but I only check it once a month or so. And today was my first time checking it in weeks, and there was nothing in it. Ah, well.

At the very least, I got to get nice pics of Rockefeller Center and St. Patrick’s Cathedral: 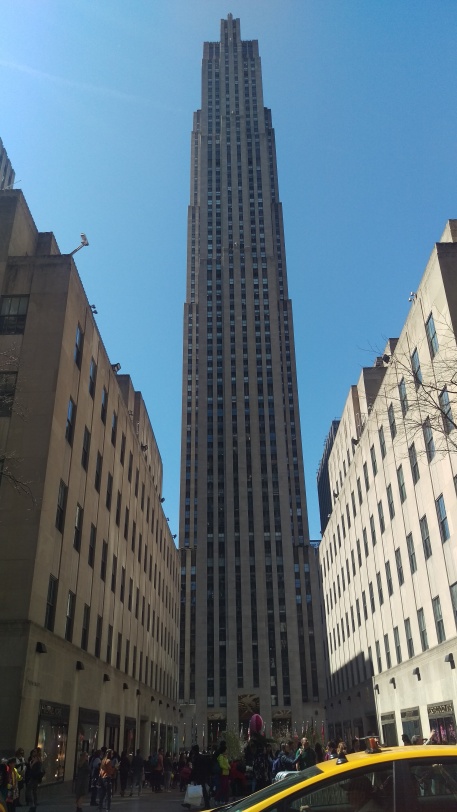 Then I stopped in Barnes & Noble, which was to see if they had copies of Aliens: Bug Hunt. They didn’t.

There’s another thing that’s changed. When I started in book publishing, release dates were more of a vague guideline than anything. Books came out in a publication month, which was generally a five-week period between the last week of the previous month and the end of the pub month listed. Occasionally, a book would actually only be released on the pub date, but those were always either massive best-sellers or written by people who were famous for something other than writing books — and those books would be listed as “embargoed” until the pub date, which speaks to how unusual that was.

Now, though, the rise of eBooks has gotten books to the same point as every other entertainment medium, to wit, one with solid release dates. Where I used to see books in stores long before their actual official date, it’s far more common for them not to show up on shelves until the day they’re supposed to hit — which is also the date that the eBook goes live. Unlike the print books in stores, the eBook releases are entirely within the publisher’s control.

My point being that ten years ago, I’d have found a copy of Bug Hunt before its official 18 April pub date. Now I have to wait until my actual birthday. *laughs*

Anyhow, after B&N I went to Grand Central Terminal:

After buying my ticket home, I had to, of course, stop at Magnolia Bakery and purchase cupcakes. (Everyone in this house has standing orders, if they’re going through Grand Central, to stop at Magnolia.) Then I got on the train and went home with my loot:

All in all a good Friday. (Ahem.) That was, of course, followed by teaching my usual kids fighting class, which went well.