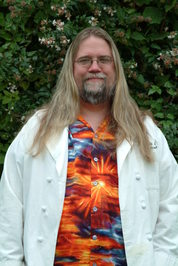 Jay Lake has at last lost his long, hard-fought battle with cancer.

I have tons of memories of Jay, though I’m damned if I can remember when I first met him. It was at some convention or Nebula Awards ceremony or some other damn place. Actually, the most likely culprit is the first Norwescon I went to in 1999.

In any case, it was always a joy and a privilege to hang out with Jay, who was smart, funny, witty, crazy, opinionated, and always wore those ridiculous Hawai’ian shirts.

One of my fondest memories of Jay was from Noreascon in Boston in 2004. Jay and Laura Anne Gilman suggested to the con com “Two Beers and a Story,” whereby the two of them and three other v/i/c/t/i/m/s/ writers — myself, Janna Silverstein, and David Levine — wrote a story in the time in takes to drink two beers. (A referee told us to drink regularly, thus not allowing us to take too long…) The story I wrote for that, “Wild Bill Got Shot,” never got sold, but it’ll be in my collection Without a License later this year.

(Come to think of it, Jay was mostly responsible for another never-published story in Without a License, though that story was actually bought and paid for by Jay but the anthology never happened for reasons I wasn’t too clear on. “Behold a White Tricycle” was a story I wrote for Jay’s 44 Clowns: 11 Stories of the 4 Clowns of the Apocalypse, and it’ll be in the collection, too.)

Anyhow, every memory I have of being in Jay’s presence is a happy one, as he was one of the most fun people to be around. I also loved keeping up with him online, as his fierce honesty, humor, and bizarre combination of cynicism and optimism was always compelling reading. And his chronicling of his entire battle with cancer was magnificent, brutal, heartbreaking, amazing, riveting, revolting, and often overwhelming.

Rest in peace, my friend.

1 thought on “from the archives: Jay Lake, RIP”