This past weekend was our dojo’s Spring Camp, where a bunch of us spend a weekend in a cabin in the Catskills and do a lot of working out — mostly outdoors — as well as stretching and meditating and other cool stuff we don’t always get to do in the dojo. We also do fun things and enjoy each others’ company.

It was a truly fantastic weekend, filled with wonderfulness. I’m much more relaxed than I’ve been in ages. And I got to learn a new kata! Of the eight active sandans in the dojo, seven of us were there, as was our one and only yondan, and so Shuseki Shihan showed us a new sai kata that we’re supposed to know. A couple of them had done it before, but it had been a while, and several of us had never done it all. By the time we were done, though, we all knew it well enough that Shuseki made a video of all eight of us doing the kata. As soon as that’s posted, I’ll put up a link.

We did workouts, we did intense exercises, we did kata, we did serious stretching, we did meditation, we went running, and we did yoga and some krav maga style self defense. We also played pool, foosball, and volleyball. It was a truly fine weekend.

Now I’m off to Los Angeles for a business trip I can’t talk about. I look forward to the part where I can talk about it, uh, soon……

While I get ready to head to JFK, here’s some more pics from camp:

At one point during the volleyball game, the ball got into the pond. This is me and Roman trying really hard to get it back. (We did retrieve it eventually, without having to go into the icky water.)

Me watching Senpai Liza take a shot at pool. 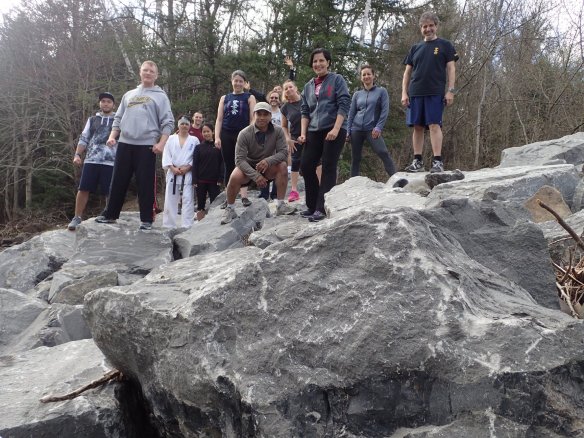