On this day thirteen years ago, Simon & Schuster released a most unusual Star Trek novel. 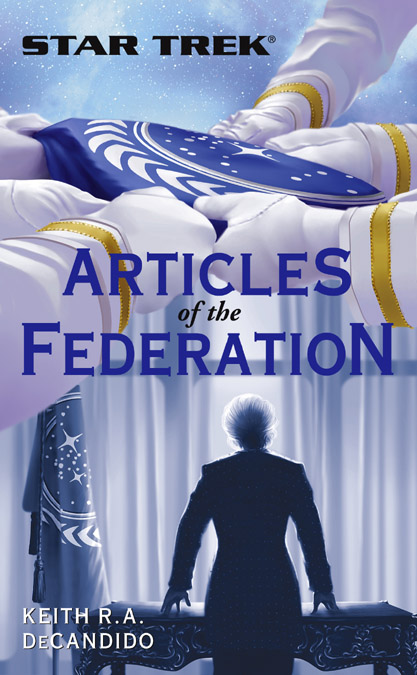 It features very few familiar characters from the TV shows and movies, and the ones who do appear (Spock, the EMH, Janeway, etc.) only do so briefly. The main characters, instead, are politicians. The main character is the Federation President, and the novel chronicles her first year in office. Unusually for a Trek tale, the entirety of the novel consists of people sitting in rooms talking to each other.

I created the character of Nan Bacco for the TNG novel A Time for War, a Time for Peace a novel that chronicled (among many other things) a presidential election in the Federation.

Amazingly enough, of all the fictional presidents of the Federation that had been established onscreen or in ancillary fiction and/or games, Bacco was the first female. The various presidents had been a variety of species, but they were all dudes.

I changed that. I’m appalled that it took until 2004 for it to happen, but as we say on Earth, c’est la vie.

Bacco was based on several people, but the main inspiration was my great grandmother Grazia Silverio DeBacco. She was a great woman who sired ten kids (including my grandmother) and was the matriarch of a huge family. She died at the ripe old age of 98 in 2003, and I created Bacco in part as a tribute to her.

Thirteen years after Articles, the novel has continued to be hugely influential. President Bacco went on to appear in 16 more novels (only one of which was by me, A Singular Destiny), with another on the way (she will be in Kirsten Beyer’s upcoming Voyager novel), and the template for the Federation government that I set up has continued to be utilized in the tie-in fiction over the last dozen years. She’s been written by David Mack, William Leisner, Christopher L. Bennett, David R. George III, Dayton Ward, Una McCormack, and Beyer. She also was a major part of the backstory for the Star Trek Online game.

Happy birthday, Articles! Long may you reign! Or, uh, something.