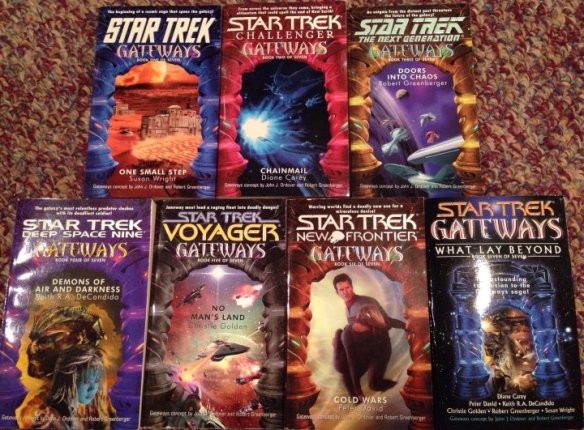 Amazon is having a sale on the Kindle editions of the Star Trek: Gateways novel crossover originally published by Simon & Schuster in 2001 — each book in the seven-book series is 99 cents each.

This crossover event featured the Iconian gateways introduced in the Next Generation episode “Contagion” and seen again in the Deep Space Nine episode “To the Death.” It was conceived by Robert Greenberger, who wrote the TNG part of the crossover, and it also established the device that flung the Enterprise hundreds of light-years away from a planet in “That Which Survives” on the original series as another different type of Iconian gateway.

Each of the four extant TV shows were covered (Enterprise debuted shortly after the series was published, and hadn’t yet been announced until we were well into writing the books), as were two novels-only series, Peter David’s New Frontier and Diane Carey’s Challenger. In fact Chainmail was the first standalone Challenger novel, and intended to launch the series, which spun out of the New Earth six-book series from 2000 that Carey wrote with Dean Wesley Smith, Kristine Kathryn Rusch, Kathy Oltion, Jerry Oltion, and L.A. Graf. It wound up not being continued for various reasons, but this was a nice look at what might have been. Meanwhile, Peter wrote this as the latest book in his hugely successful spinoff series that had debuted four years earlier in 1997 and would continue until 2015.

Meanwhile, the rest of us covered the original series, TNG, DS9, and Voyager. Susan Wright wrote a sequel to “That Which Survives,” Bob did a nifty cooperative adventure coordinated by Picard and the Enterprise, I did a rescue operation spearheaded by the Deep Space 9 crew, and Christie Golden showed how Voyager dealt with the crisis over in the Delta Quadrant.

Each of the first six books ended with the captain character — Kirk, Keller, Picard, Kira, Janeway, and Calhoun & Shelby — each stepping through one of the gateways, not knowing what lay beyond. Book 7 was called What Lay Beyond, and had each of those characters dealing with an adventure on the other side of the gateway. That wound up being a bit disjointed, as some authors treated the Book 7 part as a separate novella from the previous book (me, Susan), some treated it as the end of the book, but focused just on the captain characters (Diane, Peter), and some just lopped off the last few chapters of their novel and stuck it in Book 7 (Bob, Christie). I blame a lack of clear editorial direction, and I suspect the editor in question would do likewise. *chuckle*

The most fun part of the crossover for me was coordinating with Bob and Peter. Our three books were taking place both in the same place and the same time, unlike the others which were removed by either time (Susan, Diane) or space (Christie). But the TNG, DS9, and NF portions were all in the Alpha Quadrant in the 24th century, so the three of us coordinated our efforts, including a holographic “conference call,” where we had captains from all over the quadrant linking their holodecks to each other so they could be in the same virtual room. So the three of us wrote the scene together, and then rejiggered it to fit each of our individual books, Bob from Picard’s POV, me from that of Commander Vaughn, and Peter from Calhoun’s perspective. It worked beautifully.

If you’re wondering who Vaughn is, well, my novel was also part of the post-finale DS9 fiction, as S&S was given permission to continue the story of DS9 past “What You Leave Behind.” Besides being Book 4 in the Star Trek: Gateways crossover, Demons of Air and Darkness was also Book 4 in the post-finale series following S.D. Perry’s two-book Avatar and David Weddle & Jeffrey Lang’s Section 31: Abyss. All these first five stories (Avatar, Abyss, Demons, and “H&I”) were also collected into an omnibus entitled Twist of Faith.

Anyhow, you can now check out this series — which, is still pretty cool 17 years later — for only a buck a book! So do so! You’ll be glad you did!

4 thoughts on “Star Trek: Gateways for a buck each!”