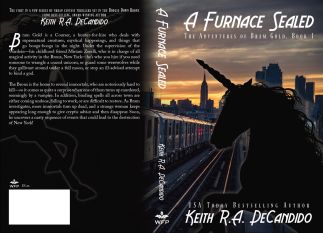 It’s a day for A Furnace Sealed on the web, it seems. Today, Mary Robinette Kowal featured me on her regular feature “My Favorite Bit,” as I talk about how much fun it was to write a book that took place in my home borough.

I love writing about the people here. The Bronx is one of the most fascinatingly diverse places you’ll find. In 2009 and 2010, I worked for the U.S. Census Bureau, and I got to see so many different places and things and people.

My favorite was going to a Buddhist monastery, located in an old two-story house on a side street near Kingsbridge Road. From the outside, it looked like just another house, but inside I was greeted by a wizened old monk and his acolyte. They gave me tea, and for half an hour, I felt like I’d been transported to a secluded region of Asia rather than the middle of the Bronx.

The team I supervised for the main Census operation included people who were from (or whose ancestry traced back to) western Africa, Haiti, the Dominican Republic, Korea, Cambodia, Trinidad, Puerto Rico, Cuba, Poland, Russia, Italy, and Ireland.

Tor.com has put up an excerpt from Chapter 2 of my new urban fantasy novel A Furnace Sealed. Check it out!

The science fiction chat show Fast Forward has been around since the 1990s at the very least, interviewing folks in the genre community. In May 2016, Mike Zipser interviewed me and I talked about media tie-in work in general and my fiction (both tie-in and not) in particular. It finally went live today! Check it out……………

I reviewed The Umbrella Academy, the new Netflix series based on the same-named comic book by Gerard Way and Gabriel Bá. I compare the comics to the TV show, and the TV show actually improved on the comic in many ways.

A lot of the show’s extra depth is courtesy of Hazel and Cha-Cha, who actually have a genuine story arc. Hazel has become disillusioned with their endless travels through time killing people and wants to settle down. Cha-Cha doesn’t want to break up a good partnership. Britton (who was overwhelmingly brilliant as Ed Kemper in Mindhunter) beautifully plays Hazel’s exhausted cynicism, while Blige is equally spectacular as the much less apologetic Cha-Cha, who is genuinely befuddled by her partner’s change of heart. What’s especially hilarious about their arc is that, while it’s about friendship and disillusionment and falling in love and all that stuff, it still involves two total psychopaths. (Hazel’s idea of a great second act, as it were, is to be able to kill whoever he wants, not who the bosses tell him to kill.) 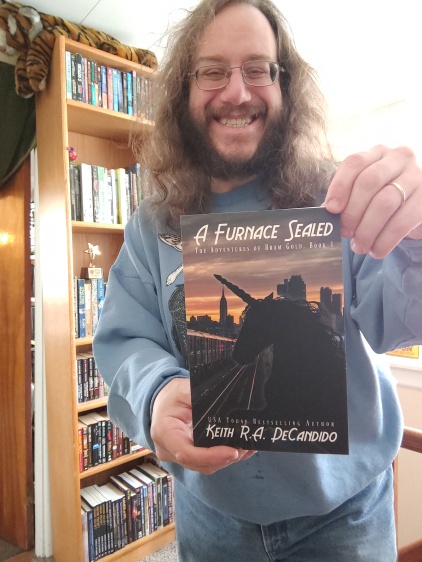 The first book that came out with my name on the cover was OtherWere: Stories of Transformation, an anthology I edited with Laura Anne Gilman in 1996. The day 23 years ago when my contributor’s copy of the book came off press and I got my hands on a copy was an absolute thrill, one that filled me with a tremendous glee.

And again today when I got my contributor’s copies of A Furnace Sealed. The thrill has not dimmed even after fifty-plus books, even after spending half my life writing books and stories professionally.

Check this earlier blog post for ordering links for the book, as well as an excerpt, and if you do pick it up (or already have), please consider writing a review on Amazon and/or Goodreads. Thanks so much!

The CGI version of the heroes on a half-shell return for a 2016 sequel to the 2014 film, with Megan Fox and Will Arnett returning, and adding fan favorites Casey Jones, Krang, Bebop, and Rock Steady. It’s a better movie than its predecessor, but it didn’t do as well, and it’s still flawed. The great superhero movie rewatch orders some 99-cheese pizza to watch Teenage Mutant Ninja Turtles: Out of the Shadows.

The movie also benefits from strong performances from Tyler Perry as the very nerdy, but still dangerous Stockman and by Brad Garrett, leaving no piece of scenery unchewed as Krang’s voice. And I like the fact that Shredder, after casually betraying Stockman, finds himself betrayed in the exact same way by Krang. (I particularly love the dialogue exchange between them. “You betrayed me!” “Actually, I barely even thought about you.”) While Stephen Amell isn’t quite as batshit as Elias Koteas was as Casey Jones, he still inhabits the role quite well, and he actually has chemistry with Megan Fox (who remains mostly harmless as O’Neill). More to the point, he sells Jones’s desire to bring the criminals to justice, as he has something at stake here. Laura Linney also does well as the cynical police chief. 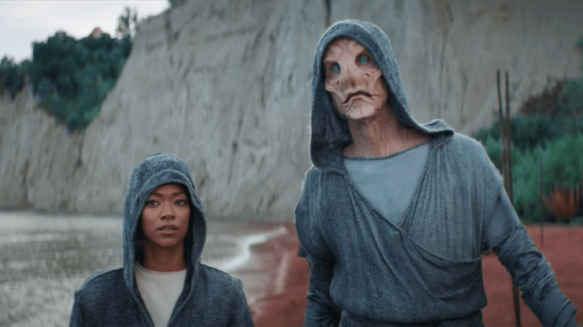 Discovery does an episode that is a sequel to both “An Obol for Charon” two weeks ago and the Short Treks episode “The Brightest Star,” as Saru proves that you can go home again, and you can completely up-end your whole civilization when you do! My take on “The Sound of Thunder.”

One of the biggest issues I’ve had with rigid “we must not interfere at all!” Prime Directive stories—the worst offenders being TNG’s “Who Watches the Watchers?” and “Homeward” and Enterprise’s “Dear Doctor”—is that they tend to turn the main characters into uncaring bastards when they’re supposed to be heroes. Heroes should never allow people to die when they can be saved. And many of them—”Dear Doctor” being a particular offender—tend to view evolution as this rigid straight line of inevitability that the Prime Directive keeps Starfleet from interfering with. But that’s not how evolution works. It’s not a straight line, it’s a jagged, curved, random, ridiculous line being navigated by a drunk driver. Evolution is constantly shifting, and it’s affected by dozens of external factors.