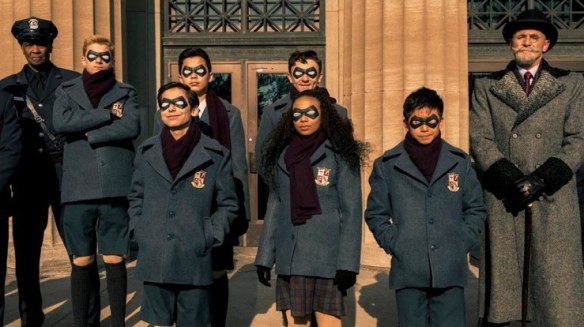 I reviewed The Umbrella Academy, the new Netflix series based on the same-named comic book by Gerard Way and Gabriel Bá. I compare the comics to the TV show, and the TV show actually improved on the comic in many ways.

A lot of the show’s extra depth is courtesy of Hazel and Cha-Cha, who actually have a genuine story arc. Hazel has become disillusioned with their endless travels through time killing people and wants to settle down. Cha-Cha doesn’t want to break up a good partnership. Britton (who was overwhelmingly brilliant as Ed Kemper in Mindhunter) beautifully plays Hazel’s exhausted cynicism, while Blige is equally spectacular as the much less apologetic Cha-Cha, who is genuinely befuddled by her partner’s change of heart. What’s especially hilarious about their arc is that, while it’s about friendship and disillusionment and falling in love and all that stuff, it still involves two total psychopaths. (Hazel’s idea of a great second act, as it were, is to be able to kill whoever he wants, not who the bosses tell him to kill.)