I will be a guest at Planet Comic-Con in Kansas City, Missouri this weekend! This is the 20th anniversary of the con, and I’ll be spending pretty much all my time at Bard’s Tower, Booth #803. (If I’m doing programming, nobody has informed me about it. Then again, my listing on the web site has a two-year-old bio and lists me as someone who’s written Spider-Man and X-Men — which is true, technically, but my one X-Men short story was 19 years ago, and my last Spidey work was 14 years ago…)

I’ll be at the Tower alongside the great Mercedes Lackey, the magnificent Dan Wells, the impressive Brian Lee Durfee, the delightful Larry Dixon, the superlative Mario Acevedo, and probably a bunch of other folks besides.

I should have copies of the Precinct books and of A Furnace Sealed, as well as other books of mine, so come on by and check it out if you’re in KC for the show! 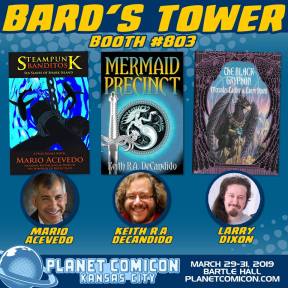 2 thoughts on “I’m gonna be at Planet Comic-Con”