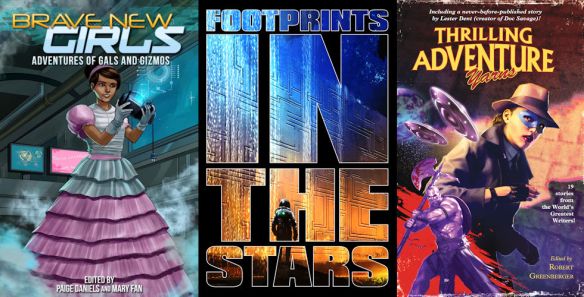 At Shore Leave 41 in mid-July, there will be three anthologies debuting, and I’ll be in all three of them!

Two are the first two science fiction stories of mine featuring a bright young woman named Consuela de la Vega, who lives on the moon in the near-ish future. The first story is “The Silent Dust,” which will be in Brave New Girls: Adventures of Gals and Gizmos, edited by Paige Daniels & Mary Fan; the second will be in Footprints in the Stars, edited by Danielle Ackley-McPhail, and will be called “The Puzzle.”

The BNG anthology series are all charity anthologies, with proceeds going to the Society for Women Engineers. My story also has an illustration by the mighty Tom Daly (my collaborator on “In Defense of Self” for MINE!).

Footprints is the latest in eSpec Books’s “Beyond the Cradle” of science fiction anthologies, with stories about the discovery of alien life.

My third story is “Alien Invasion of Earth!” which will be in Thrilling Adventure Yarns, an anthology of all-new pulp stories edited by Robert Greenberger. My story will have a nifty illustration by the great Mark Wheatley.

These three anthologies will all debut at Shore Leave, and the following contributors will all be at the con, besides me:

So if you’re coming to Shore Leave, you’ll get the chance for a ton of autographs on all three new books…..