As one possible thing to read, how about my writing? I’ve already posted about my various writings based on TV shows — including my Star Trek work and my work based on other shows — and work based on movies, and now we turn to stuff about gaming. I’ve written novels and short stories and comic books based on BattleTech, Command & Conquer, Dungeons & Dragons, Magic: The Gathering, StarCraft, and World of Warcraft, as well as an essay about writing gaming fiction.

“Stories for Shut-Ins: Author Readings from Across the Universe” kicked off today with me reading “Used To Be,” my story in Across the Universe: Tales of Alternative Beatles, edited by Rollickin’ Randee Dawn and Mighty Michael A. Ventrella, published by the fine folks at Fantastic Books.

Kes is fertile! Neelix isn’t sure about parenthood! Tuvok misses his kids! Wildman is pregnant! And Voyager is too sexy for its shirt! The Star Trek: Voyager Rewatch goes through the “Elogium,” an episode that is entirely about fucking and procreation.

As for Neelix, he’s not nearly alien enough. From the moment he finds out what the elogium is, up until his final scene with Kes, Neelix says a whole lot of things about parenthood, including some really hoary and stupid gender-role distinctions (thankfully, Tuvok punctures these pretty thoroughly). If those exact same lines of dialogue were given to a middle-class suburban white guy in 1950s America, not a single word would change. That’s a spectacular failure of imagination.

Starting tomorrow, the 30th of March, Randee Dawn will be presenting “Stories for Shut-Ins: Author Reading Series from Across the Universe,” as various authors of that anthology of alternate Beatles tales will read their contributions to it.

First up will be me reading “Used To Be” on Monday, followed by Brenda W. Clough, Bev Vincent, and Charles Barouch. Details at the link! 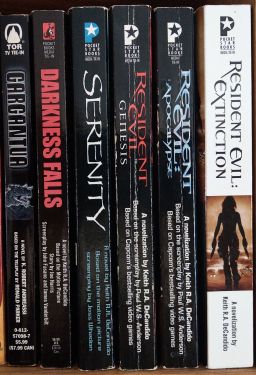 As one possible thing to read, how about my writing? I’ve already posted about my various TV tie-ins, including my Star Trek work and my tie-ins to various and sundry other shows, and now we turn to my movie tie-ins. I’ve written both original novels and movie novelizations, as well as short stories and nonfiction, in the worlds of Alien, Blade Runner, Cars, Gargantua, Darkness Falls, King Kong, Kung Fu Panda, Mary Shelley, Night of the Living Dead, Resident Evil, Serenity, and Star Wars.

Night of the Living Dead

The latest of my KRAD COVID readings is “Ganbatte,” which is the first work of my fiction that has won an award! Appearing in Joe Ledger: Unstoppable and taking place in the world of Joe Ledger created by Jonathan Maberry, the story provides the backstory for Lydia “Warbride” Ruiz and which won Best Short Story in the Scribe Awards given out by the International Association of Media Tie-in Writers in 2018.

Check it out, and please consider subscribing to the channel! 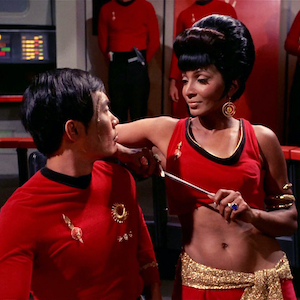 The latest episode of the Sci-Fi Diner podcast is now live, and episode #381 is a recording of a panel that I participated in at Farpoint 2020 last month, in which we talked about Star Trek‘s Mirror Universe. Introduced in the original series’ “Mirror, Mirror,” and seen again in several episodes of Deep Space Nine, Enterprise, and Discovery, not to mention a ton of novels, short stories, and comic books, we talk about the world where the good guys are bad guys, the Vulcans have goatées, and the uniforms are outlandish.

The panel is moderated by Kyle Williamson, who cosplays as Q, and also does the Fandom Spotlite podcast. He’s joined by me (who’s written twice in the MU, the Voyager MU short novel The Mirror-Scaled Serpent in Obsidian Alliances, and the short story “Family Matters” in Shards and Shadows), Sci-Fi Diner podcast cohost Miles McLoughlin, and Royce Essig of the web series Dark Operations: Terminus.

Everything comes to a head on Coppelius — the super synths, the Zhat Vash, the Borg Cube, La Sirena, Soji, Soong, Narek, Data, Seven of Nine, and more than one big-ass fleet of ships. My take on the grand finale of Star Trek: Picard‘s first season, “Et in Arcadia Ego, Part 2.”

Rather famously, playwright Anton Chekhov believed that stories should not have extraneous details. On several occasions, Chekhov wrote about this in letters, variations on the theme that if you have a gun on the wall in your story, it should be fired by the end of the story, or it shouldn’t be on the wall in the first place.

This season of Star Trek: Picard has hung a good many guns on the wall, and while Part 2 of the season finale fires most of them, it doesn’t quite fire them all, and a few of them misfire badly. Having said that, it’s a most satisfying conclusion to the season.

A depressingly appropriate song from Warren Zevon’s magnificent 1989 album Transverse City. Probably the only rock-and-roll song that references Georgia O’Keeffe, certainly the only one to reference both her and Michael Jackson, it’s a good song for coronavirus blues…..

The latest of the KRAD COVID readings is a shorter one: “Behold a White Tricycle,” a story I originally wrote in the early 2000s for a wound-up-never-being-published anthology called 44 Clowns: 11 Stories of the 4 Clowns of the Apocalypse. It was eventually printed in my 2015 short-story collection Without a License, and I read it for you here…….