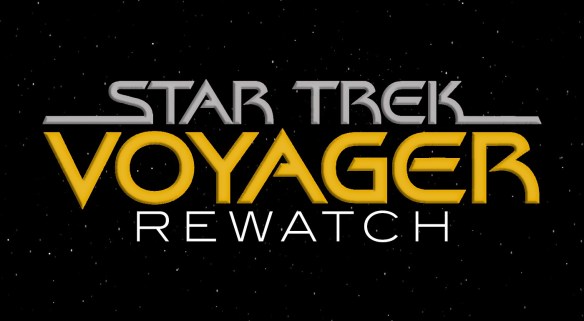 Seriously, what more need be said? It’s the episode when Janeway and Paris get turned into salamanders and make babies. And this is supposed to be evolution! Ugh. The Star Trek: Voyager Rewatch hits the show’s nadir as we cross the “Threshold.”

To be fair, that’s at least one way you can say they’ve “evolved,” but then we come to the absolute worst part of this episode, which is the most obvious example of Brannon Braga’s perpetual misunderstanding of evolutionary biology, first seen in his first solo script for Trek, TNG’s “Identity Crisis.” The EMH talks about how Paris is going through millions of years of evolution in a day—but that’s not how evolution works, because one of the most important elements of evolution is environmental factors. And there are none, because Paris is lying in a bed in sickbay, but that’s going to affect how he evolves.

Then we find out that the end result of him losing his hair, his skin getting weird, his attitude changing, his growing another heart, and losing his tongue is to turn into a salamander. A very small salamander. Sure. That makes sense. (It makes nothing like sense. Where’d all the extra mass go? How did hitting them with anti-protons get that mass back?)