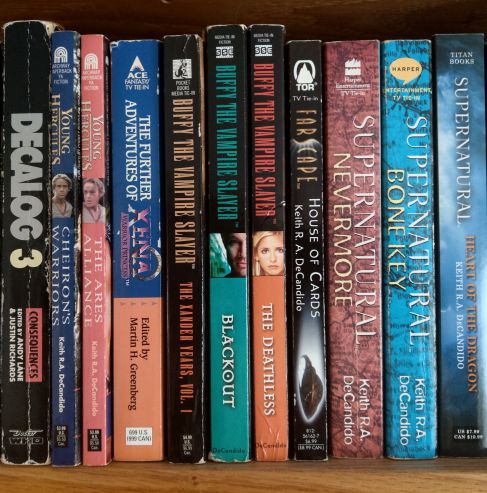 As one possible thing to read, how about my writing? I’ve already posted about my Star Trek work, and now we move on to other TV show tie-ins, which are listed below in alphabetical order, and include: Buffy the Vampire Slayer, CSI: NY, Doctor Who, Farscape, Gene Roddenberry’s Andromeda, Heroes, Leverage, Orphan Black, Sleepy Hollow, Stargate, Supernatural, The X-Files, Xena, and Young Hercules. 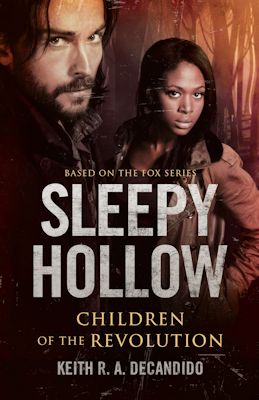 I wrote the only tie-in novel (and one of only two tie-in books) to the delightful FOX series Sleepy Hollow. Entitled Children of the Revolution, and released in the fall of 2014, right when the show’s second season debuted.

The book takes place toward the end of the first season, with Crane and Mills in a race against time to stop a second attempt to resurrect Serilda of Abaddon, an attempt that requires gathering several medals given to heroes of the American Revolution, including Crane. Besides Sleepy Hollow, we also get to see our heroes in New York City (at both the Metropolitan Museum of Art and the Museum of the City of New York) and Ticonderoga (visiting the historic re-creation of the fort), as well as flashbacks to the Revolutionary War and afterward, and the true reason why Washington crossed the Delaware.

So check it out!

Three years ago today, I wrote the following blog post about a project that I was not allowed to talk about in detail yet. Now, of course, the cat’s long out of the bag, as the book came out in the fall of that year: Sleepy Hollow: Children of the Revolution, the only novel that was done to tie into the FOX TV series starring Tom Mison and Nicole Beharie (which was just cancelled a couple days ago).

So here’s me describing the incredibly smooth process of writing the novel, working with Meagan Stacey and Kim Silverton at Random House — though, to my disappointment, it did not lead to more work, as they didn’t do any further SH novels, and both Meagan and Kim moved on to other jobs at other companies before too long.

Anyhow, feel free to fill in the details as you read the following post from 2014….

On Wednesday the 5th of February, I received an e-mail from an editor approaching me about a tie-in project. I said yes, and then we started the outline process.

Less than a week after that initial e-mail, I sent that editor a first-draft proposal. On Thursday the 13th of February, I got licensor feedback, and I sent a revised proposal the very next day. On the following Tuesday, the 18th, the licensor approved the outline, and a formal offer was made to myself and my agent.

The catch being that the book was due on 28 April.

I spent the rest of February clearing the decks, as it were, getting all the stuff done that needed to get done and then spent all of March and April writing the novel.

I turned in the manuscript on Monday the 28th of April as contracted (despite the best efforts of Hartsfield-Jackson International Airport), I got feedback from my editor on Wednesday the 30th, but she held onto it until the licensor provided their feedback, which came on Tuesday the 6th of May.

To my delight and glee (and relief), the notes were incredibly minor. It took me all of three hours to do all the revisions requested by editor and licensor, and I sent the revised manuscript back on Wednesday the 7th.

I have written and edited more tie-in novels than I’m willing to count. It is very rare for a process to go from “you wanna do this book?” to an approved manuscript in three months, rarer still for those three months to be as smooth as this has been.

The book is going to be announced later this month, at which point I’ll be able to use less vague terms than I’m using in this blog entry, but I want to say what an absolute joy this project has been. And on top of that, it’s basically covering rent for several months, which is a relief to me and Wrenn, as it’s one less financial burden.

I can say that it’s a license I’ve never worked in before, and one that I think will be successful (and with any luck lead to more work). I really can’t wait to talk about it, but I can say that it’s been one of the best experiences of my career. And I’ve had some fantastic experiences, so I don’t say that lightly.